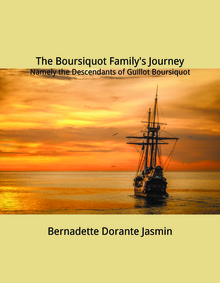 The Boursiquot Family's Journey: Namely the Descendants of Guillot Boursiquot

The Boursiquot family is a noble group which stemmed from the northwestern part of France. Many of them left France because of religious persecution. They hoped to be able to return, but that did not happen. As a result some of the members of the family gravitated to the new world. One area where they flourished is Haiti.

“Between the 16-17th century the Huguenot sect suffered great persecutions in France.” As a result several members of the Boursiquot family, who were Huguenots left France. The Huguenots sect were a group of religionists from France who based their religion on Calvinism. Because of persecution and maltreatment many of these people left France for England and later Ireland. Many others escaped to other parts of the world.

It’s hard to determine why Guillot Boursiquot and his brother Aaron left France. Many of their siblings departed for England because the Huguenots were persecuted and killed for many years. But the two brothers departed from France and traveled a great number of miles beyond the boundaries of Europe and settled in the Caribbean.

Unfortunately, Aaron died early on their venture and Guillot settled on the western part of Saint Domingue (also known today as Haiti). He raised a large family like his parents, under harsh conditions. He had many descendants who thrived and multiplied on the island.

Many of them removed to the United States and elsewhere during the Haitian Diaspora.