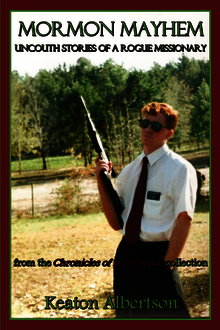 Mormon Mayhem: The Uncouth Stories of a Rogue Missionary

Most Mormon children enjoy the homogenous lifestyle afforded to them by their years of systematic brainwashing. They take comfort in the fact that they have ready-made answers to all of life’s big questions provided to them by their cultish church leaders and devoted families. Occasionally, some children challenge the premise of Joseph Smith’s gospel teachings and actively resist the stifling of individualism from the Mormon Church. Keaton Albertson was of this latter disposition. Mormon Mayhem is a non-fiction book of Keaton’s personal narratives that detail his adventures of belligerence and inconsideration for his fellow man while growing up under the influence of Mormonism. Paralleling the storyline of Criminal Mischief, Keaton chronicles his experiences of being indoctrinated into the Mormon faith and narrates his devious deeds from his time spent with the Boy Scouts of America up until his departure from the church fold. The crowning event recorded in the writing is Keaton’s attempt to reform his antisocial behaviors that were exhibited within his earlier work by embarking upon a proselytizing mission for the Mormon Church. While attempting to convert others into the hokey religion, Keaton soon finds that his recruiting mission reveals itself to be ripe with contradiction. His acts of debauchery and general assholishness promptly resume and he questions whether Joseph Smith was all that the self-proclaimed prophet was cracked up to be. The obnoxious annals of satire collected within this volume juxtaposes flagrantly immoral acts with a penetrating view into the life of an indoctrinated Mormon youth who struggles toward achieving a life of autonomy apart from the Church. In addition to offering readers a myriad of amusing anecdotes of discordant behavior, Mormon Mayhem exposes the sacred rites that take place within Mormon temples and offers iconoclastic accounts of secret ceremonies and intimate Bishop Interviews.