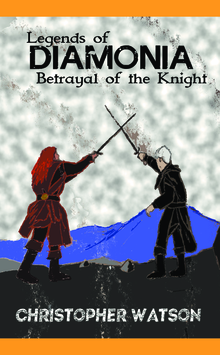 Legends of Diamonia: Betrayal of the Knight

Diamonia is covered by the blood of war. Two years have passed since the dreaded Blood War began in the newly claimed desert of Diamonia. Edward, Levis, Zoll, and the other knights have been sent onward into the battles. Each battle seems to follow a familiar pattern, and the knights find themselves very far from their home kingdom. As ShadowHawk and Susan reach the end of their Squire training, the war reaches its bloodiest height. Soon, evil shall present itself as it grows stronger, and the power of Syrik will bring devastation upon the Gem country.