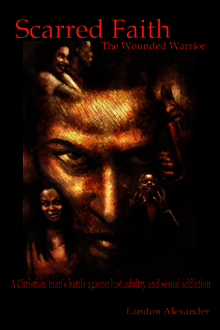 This is the Story of a Christian Man whose heart and faith are in the fight to save souls. He has been wounded by the sin of temptation and lust that have overcome his life. The battle he now faces is how to regain his once strong faith and re-establish his relationship with God through Jesus Christ and his marriage to his wife.

He feels deactivated by the church he serves and slowly finds himself lost in his sins and how it has affected the ones he loves the most!

This is the journey of one man, but the story of many!

Landon Alexander - Born and raised on the Westside of Chicago, in 1978 he enlisted and served in the United States Navy for six years. His background is in music, music production, music publishing and management.

Landon Alexander is married with children, and he gave his life to Christ in 2001. He has since been on an endless quest to know God better. With a passion for ministry to men, Landon Alexander established the Scarred Faith Book Ministry in 2008, and The Wounded Warrior is the first of many stories that he will bring to his readers.